If you missed the Kickstarter, you can still order all the items from my fall bundle. Head on over to the store and check it out! You can also see the titles I’m distro-ing through The Tiny Report.

Limp Wrist, the Micro-Press Yearbook, and the Preston Spurlock screenprint are also available at Desert Island.

I’m trying something new! I’ve been jealous of micro-presses like Oily or Youth in Decline that offer bundles or subscriptions. I’ve never had my act together enough to release a “fall line.” But this year is different! I’m releasing three handmade items this September: a comic (Limp Wrist by Scout Wolfcave and Penina Gal), an untitled screen print by Preston Spurlock, and a zine by me (The Tiny Report: Micro-Press Yearbook 2013). I’ve just Kickstarted this, so check it out! 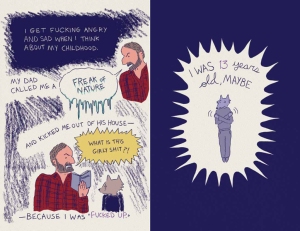 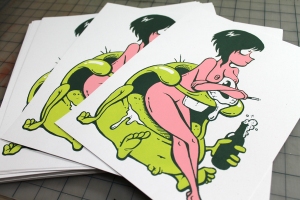 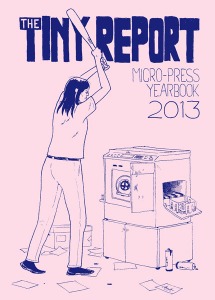 Gee, it’s been a while since I’ve updated. There’s a reason for that: I started a new blog that I update a few times a week called The Tiny Report. I try to track all the micro-pess news I come across. Check in with me there!

A new book has been added to the shop since I last posted. Check out Forward Looking Statement, the latest work by Jess Johnson. Jess uses what he calls “lost and found text” to create sketches and collages that form a unique type of autobiography. This little zine is just $2, you can’t beat that!

I’m leaving in a few hours for Canada! It’s my first TCAF. If you’re going too, look for me at table 176.

The talented Vreni Stollberger will be lending a hand at the Paper Rocket table. Come by and buy her comics! 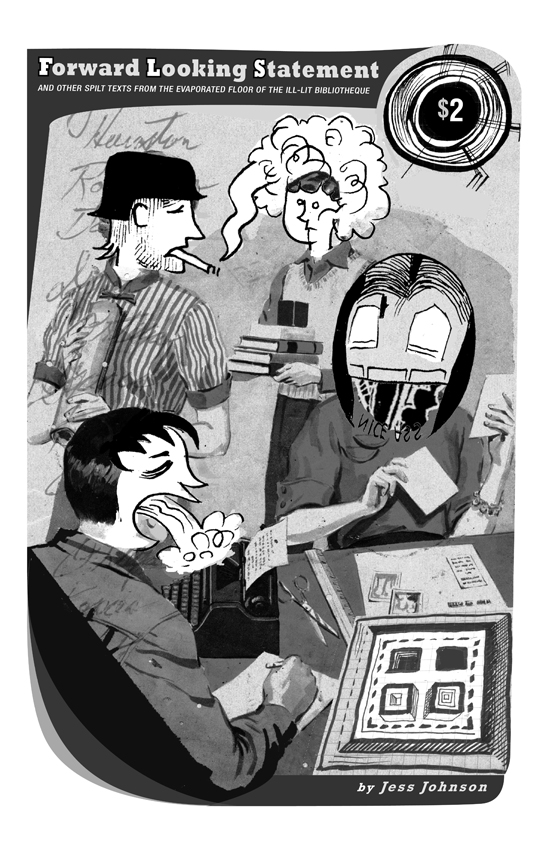 I wrote a lengthy recap of the Brooklyn Zine Fest on my other website, The Tiny Report. Check it out!

My friend Preston helped me at the table. What a salesman!

Three comics events in three weeks! I need a vacation.

But before that happens, I’ll be a the Brooklyn Zine Fest. Come check it out tomorrow. I’ll be there Saturday, not Sunday.

It’s that time of year again!

(NOTE: Katie Skelly had to cancel. But we still have five readers!)

KGB Comix Night is more than just a night of free entertainment—we also have a fun raffle with awesome prizes! A $5 donation will get you a raffle ticket. Raffle proceeds are split between the host and readers.

Stephanie Mannheim grew up in Ann Arbor, Michigan, where she began self-publishing her own minicomics in high school. She currently resides in New York City, where she is completing her senior year at Barnard College of Columbia University.
www.stephaniemannheim.com

Hazel Newlevant is a cartoonist in her senior year at the School of Visual Art. She has drawn and published many minicomics, including the Xeric Award-winning Ci Vediamo. Her work was recently honored with the Prism Comics Queer Press Grant.
www.newlevant.com

Connie Sun is a New York-based cartoonist who draws an autobiographical webcomic every weekday. She is a self-taught cartoonist who works in higher education by day and sleeps at night.
www.conniewonnie.com

Mike Taylor is a Brooklyn-based artist whose work includes the long-running zine Late Era Clash (started in 1994, and currently in its 25th issue). Mike recently had his first solo-show, NO/FUTURE, at the Booklyn Art Gallery.
www.late-era-clash.tumblr.com

Jess Worby is a cartoonist, illustrator, and teacher whose clients include the New York Times, Wired.com, and McSweeney’s (among others). He draws pictures that feel alive and makes stories about how strange it is to be a person.
www.jworby.com

I thought I wouldn’t make it to MoCCA this year, but at the last minute Hazel Newlevant, Robin Enrico, and I got a half table. Look for us at table G7.

Characters will be there. It’s also available for order in the shop.

Last weekend I met a nice guy named Geoff Duncanson. He’s an artist, he helps run the Ditko Zine Library, and he’s all around a cool dude. We talked about Paper Rocket and he did this little write-up. Pretty cool! 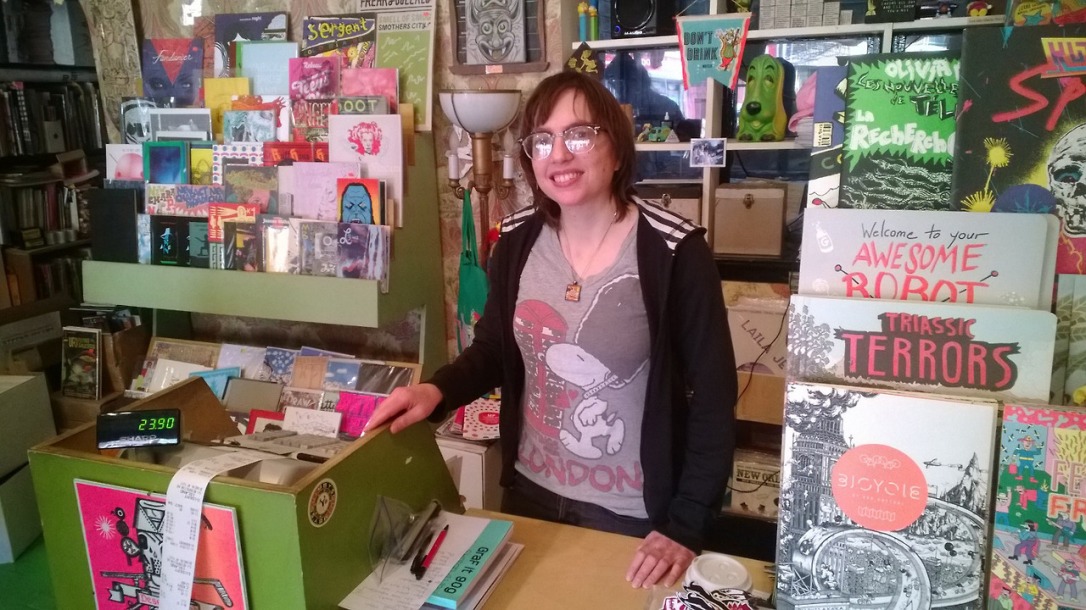 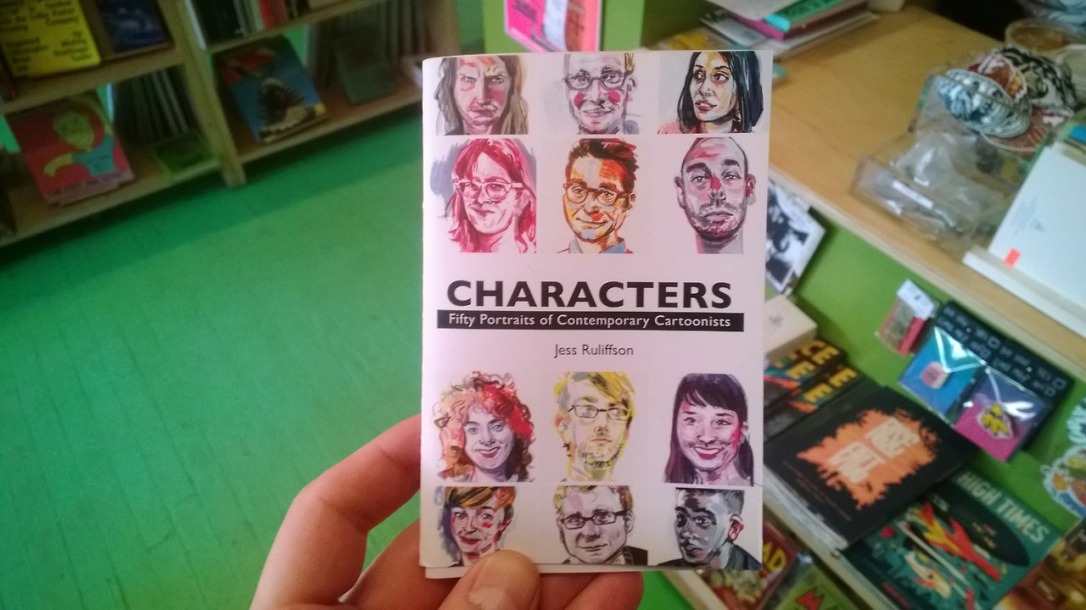 The Paper Rocket & Friends Birthday Release party was a hit! I couldn’t have asked for a better birthday. The room was filled with friends enjoying cheap beer and cake pops (as of late, my favorite things). I gave a little presentation on the production process involved in Character (because, why not, I think it’s interesting) and Jeffrey Lewis showed us some illustrated music videos he’s been working on. Jess did a painting demo, using Desert Island owner Gabe Fowler as her subject.

Good times. I feel good about being 36. 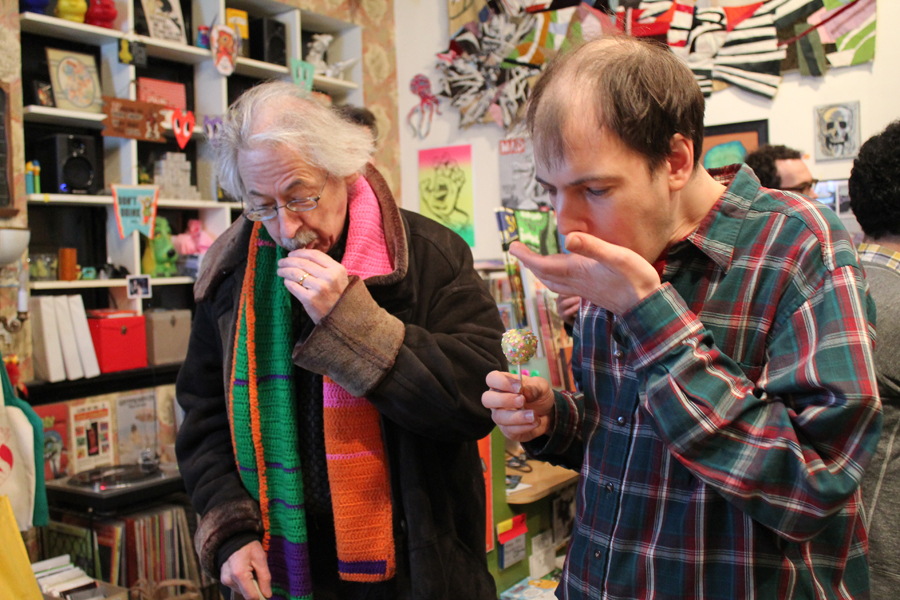 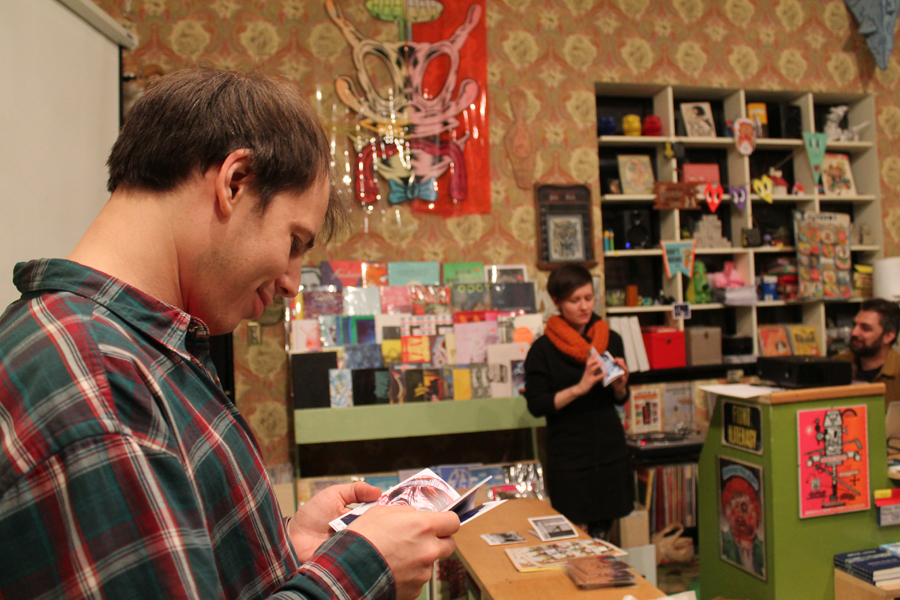